ANIMAL RELOCATION TO UNITED STATES: HOW IS THIS DONE?

Travelling to the United States with ones dog or cat requires adherence to certain rules which are reiterated here.

The first of them concerns air carriers, as some of them stipulate that live animals may only travel by air if the outdoor temperatures on arrival are acceptable (not too hot, and not too cold!).

Once this condition has been met, the rules for importing animals to the United States are simple:

You are allowed to transport to the USA kittens and puppies younger than three months old should the following rules be adhered to: (some airline companies do not accept kittens and puppies, and for most of them, they are only accepted from more than ten weeks old. Ask us about this!)

Transportation via aeroplane to certain airports in the United States of America may only be done through transit flights. Thanks to our very strong partnership with United Airlines –PetSafe, we are able to offer several different levels of service during stopovers.

We can also transport your pet right to your home in the USA.

New York, Los Angeles, San Francisco, Miami and even Atlanta are just over a few hours away via aeroplane for your pets.

Take note however, that in certain States, importation rules differ to some extent. For example, to import animals to the State of Hawaii and the Territory of Guam, a quarantine period is required.

For the transportation of other pets such as rodents, birds or reptiles, the importation rules differ. Don’t hesitate to contact us about this.

The links below will direct you to the websites of the USDA – APHIS and the CDC which will allow you to check the regulations for importation of your pets.

By choosing the PREMIUM package, we can take care of all, or some of the required pet-related exportation and importation procedures.

Take your pet to a journey with Air Transport Animal and get our recognized expertise in living animal transportation for many destinations: Bahrain, Japan, Sri Lanka…

For any special needs or requests

Our mission is to offer a high level of care for your pets, which is why we strictly adhere to health and transport regulations.

Didon in the land of the lions!
>>  Read more 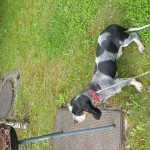